In the Lojong Trainings of Tibetan Buddhism, a series of aphorisms is used in training the mind to expand beyond it's usual conditioned patterns. Operating as mental reminders to frame our experience in particular ways -- both on and off the meditation cushion -- these 59 slogans, arranged in 7 main points, can be quite helpful in cultivating an open heart and a clear head.

(Yet another disclaimer: Although decidedly a Geek when it comes to Spiritual Practice, I am not really a scholar Of Tibetan Buddhism.  I'm more into "hand's on" practice, testing things out in the reality of my own life and comparing notes with others who are similarly inclined.  The following bibliography will confirm my amateur status, but I've been asked, prompted and cajoled to at least point the direction to some of the available literature and on-line resources by some friends of mine.  Here it is.....)

Lojong on the Web

Wikepedia may be a good place to start to get an overview of the tradition and teachings: http://en.wikipedia.org/wiki/Lojong  (This citation may confirm my amateur status.)

Train Your Mind: Lojong commentary by Judy Lief is a Lolong Course presented by Tricyle Magazine On-Line with succinct and accessible commentary on each slogan and a suggested Practice for the week by Acharya Judy Lief.  (Unlike me, she gets right to the point.)
http://www.tricycle.com/meditation-buddhist-practices/lojong/train-your-mind-lojong-commentary-judy-lief

Lojong: How to Awaken Your Heart by Pema Chodron is a Shambala Sun on-line article by Pema Chodron with an introduction to the Teachings and her brief commentary of some of the slogans.
http://www.shambhalasun.com/index.php?option=content&task=view&id=1562

Seven Points on Training the Mind: The Root Text A list of the 59 slogans categorized in seven points as translated by Chogyam Trungpa from the work of 12th century Tibetan teacher Chekawa Yeshe Dorje.
https://thebuddhafultao.wordpress.com/2012/07/04/the-59-slogans-of-lojong/

The Tonglen and Mindtraining Site is a rich resource that has excerpts of commentaries on each slogan by seven teachers including: Chogyam Trungpa, Pema Chodron, Jamgon Kongtrul, Alan Wallace, Geshes Rablen and Dharvey, Dilgo Kheyentse Rinpoche -- and Osho.  At some point, I'm going to surf through that one to catch other angles on the slogans.  Although a bit clunky, there are other features of this era on on-line communities that might be interesting. Links to biographies and books by each -- and an audio slogan generator that can be set to run sequentially or randomly???)
Currently under Revision: check later

(If you're so inclined, a Google Search "lojong training" will present you with much more. Lojong training is widespread in four schools of Tibetan Buddhism. There are quite a few Tibetan teachers who have made it to the West these past decades and a number of Western scholars who've translated the teachings.)

(These are the books I've personally poured through several times with links to Amazon.com where you can buy new or used copies -- if you can't find them in your trips to your local library or independent new or used bookseller.  Some of the Amazon links may have a free look inside though....wink, wink)

Start Where You Are: A Guide to Compassionate Living, Pema Chodron, Shambala Publications, Boston and London, 1994.  This is where I started -- and have returned several times.  We are really fortunate to have a teacher who can communicate within our own culture and language with such clear and simple brilliance.  At age 78,  I think she's really seen it all -- and she offers her experience and understanding to us with humor, grace and humility.   I'd highly recommend it to anyone who wants to really dive into Lojong Practice.

Always Maintain A Joyful Mind: and Other Lojoing Teachings on Awakening Compassion and Fearlessness, Pema Chodron, Shambala Publications, Boston and London, 2007.  The 59 slogans with a very brief comment/clarification on each by Pema Chodron. A great set of "reminders", this book also includes an audio CD with Pema introducing Tonglen Practice and offering a guided Tonglen meditation.

Training the Mind and Cultivating Loving-Kindness, Chogyam Trungpa, Shambala Publications, Boston and London, 2003.  Actually there are several editions of this available.  Mine is a dog-eared copy printed in 1993.  Edited by Judy Lief, this is a compilation of Trungpa's talks on Lojong.  I started reading it shortly after I read Start Where You Are about ten years ago.  Trungpa's imagery isn't as accessible as Pema's and may call for diving into the Glossary now and then, but it's one of the classics of this era.  He is especially articulate about watching out for our own propensity to grab onto the Dharma as a means of propping up our own ego.  Pema is a bit easy on us about that.

The Practice of Lojong: Cultivating Compassion through Training the Mind. Traleg Kyabgon, Shambala, Boston and London, 2007.  This work from another emigre Tibetan Rinpoche has extensive quotes from a number of Tibetan Buddhist texts.  Like Trungpa, he is rather direct in his assessment of Westerners as being fundamentally too self-absorbed, yet having left monasticism and married in Australia in the 1980's he does offer some pithy and helpful advise on applying the Lojong slogans to a modern lay lifestyle.

Training in Compassion: Zen Teachings on the Practice of Lojong, Norman Zoketsu Fischer, Shambala, Boston and London, 2013.  In the amazing 21st cauldron of worldwide communication an American Soto Zen Teacher draws on his experience and understanding to present the Lojong Trainings in an what I found to be a refreshing and inspiring fashion.  An American "Jew-Boo" baby boomer who still has ties to his synagogue,  Zoketsu has lived an "engaged Buddhist" life,, working with teens, doing hospice work, etc.  He has also been quite active in the inter-faith movement bringing the insights of Suzuki Roshi's Soto lineage into dialogue with other religious teachers.  Now that I'm a regular church-goer, his book, Opening to You: Zen-inspired Translations of the Psalms, is on my short list of books to read.

Buddhism with an Attitude: The Tibetan Seven Point Mind-Training, B. Alan Wallace, Snow Lion, Ithica, NY, 2001.  Michelle loved the title and ordered a copy.  So did I.  I've wandered through Amazon.com's "Look Inside" feature and like what I saw! Obviously a true scholar, here is his bibliography of current Lojong commentaries in English: 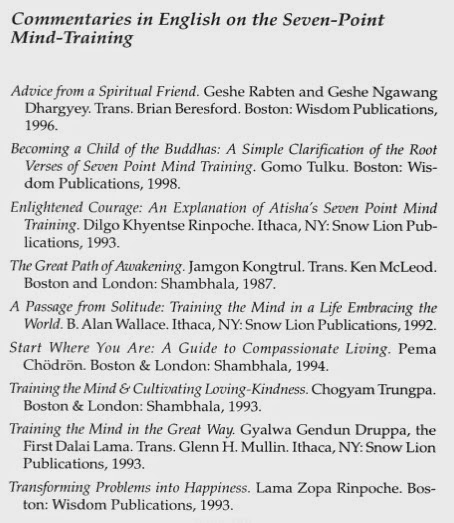 A WORK IN PROGRESS:
In this era, it's obvious we can propel our way into a seemingly endless search for information on this stuff.  Google provided about 54, 000 hits on Lojong Training in .54 seconds.  I may surf around a bit.  There are other books, YouTube Videos, Podcasts, etc.  But, like any Practice, the proverbial proof is in the pudding.   To really taste these Teachings, you have to cook it in the cauldron of your own Pracice, on and off the meditation cushion. I think mixing it up with other people to compare notes is also really helpful as well.

Free and Open to All

9:00-10:30 An Ongoing Introduction to Meditation: Meditation, Mindfulness -- and Mission

Beginners Welcome
Free and Open to All